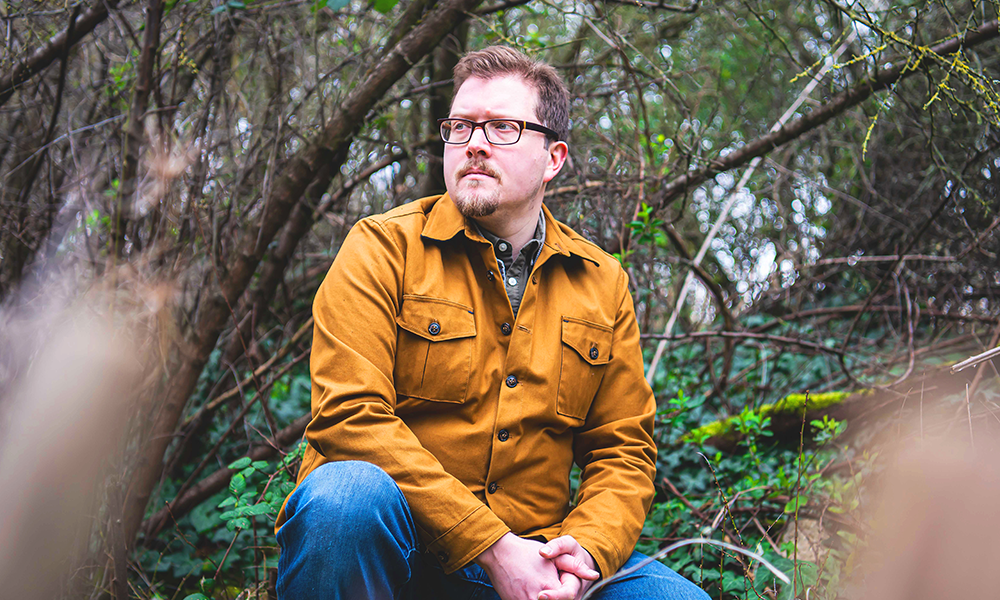 Billed as a “lyrical interrogation of a capital city, a landscape and our connection to place”, its 464 pages host a heady blend of historical research, reportage and personal memoir that promises to change the way its readers view urban areas.

A published poet as well as an author, publisher and arts producer, south London-born Tom has lived in Rotherhithe with his wife and children since 2014.

He said: “I grew up on the River Effra, literally over it because it’s subterranean, and that made me realise there’s a whole world beneath the streets.

“When I was 17 I wrote a very long and bad poem called Effra, which was an attempt to reflect the lost rivers in writing and, ever since then, I’ve been interested in trying to capture the history and atmosphere of London – its speed, aggression and that underlying sense of violence one feels in the city.

“I wanted to show that strange dissonance between the London of high finance and the London of poverty and grime as well as the new London that’s rising above us now.

“My way in was the lost rivers – some of them are still flowing, but many are untraceable so you’re looking for fragments or remnants. I’m interested in the natural landscapes of London so I started looking at the geological foundations of the city.

“The premise of London Clay is a series of walks, but it’s trying to understand how the deep city of geological strata has determined the history of the city, and also how we feel about it and approach it today.

“It’s not a traditional guidebook – firstly, each journey tries to get under the skin of the place and immerse readers in that weird landscape, trying to unpeel the surface of the city.

“Secondly, I would genuinely love it if people felt inspired, both to go to the places that I write about, but actually more so to go to places that they know, that they live in or maybe work in, and use that same method of starting with the geology.

“The extract here features my journey to the River Lea and, because I’d never been there, discovering this extraordinary landscape – the developer’s dream of London City Island, Bow Creek Ecology Park and the absolutely amazing Trinity Buoy Wharf populated by artworks all about immersing us in deep time – the perfect place to end my journey across the city.”

London Clay: Journeys in the Deep City by Tom Chivers is published by Doubleday and costs £20 in hardback.

>> I arrive in Limmo to the music of screeching tyres: a silver hatchback flooring it out of the western roundabout of the Lower Lea Crossing.

>> I had crossed the river to get here, to walk the final stretch of the Lea, on an empty train from Rotherhithe, before trekking through the former maritime ‘hamlets’ of Wapping, Shadwell, Ratcliffe, Limehouse and Poplar – now one continuous development from the Tower Of London to the Lea.

The river is where it ends.

‘To start again. With a wiped slate’.

>> Leamouth: Limmo: Limbo. The purgatorial energies of the place are overwhelming. Ruined dock walls stand in the shadows of half-built towers, open to the wind; sales and marketing suites for future homes; concrete flyovers sunk into alluvial swamp; the brine-stink of Bow Creek, as the Lea is called down here, where the channel loops back on itself in a series of hairpin bends.

The Lea once formed the border between Wessex and the Danelaw and it still feels like frontier land – London’s Wild East. On the near side, the Saxon kingdom of Alfred (urbane, Christian); on the far bank, the great heathen army of the Vikings under Guthrum. The earliest canalization of the Lea may date to this time, when in AD895, Alfred ordered the draining of its lower reaches to prevent the Viking fleet reaching the Thames from their base in Hertford. In the middle of the roundabout a giant figure surveys the traffic heading across the Lea – the three legs and disembodied face of Allen Jones’s Aerobic (1993) – a rusting, sheet-metal Matisse whose feet are barbed like arrowheads, like something dredged from the water.

>> I find a bench by Bow Creek and carefully disinfect my hands with antibacterial gel before wolfing down a shop-bought sandwich. A couple in matching Lycra stop for a photo, their beaming selfie framed by an island of green wilderness on the opposite bank, where dense vegetation spills over the steel revetments at the water’s edge. Storm clouds are gathering to the north as I cross to the island by a modern footbridge.

The bridge spans the creek just below the nine-lane flyover of the A13 and also runs parallel with an abandoned single-track railway built in 1848 to carry goods between Canning Town and the East India Dock. The railway bridge is now covered with graffiti and rendered inaccessible by forests of weeds and nettles at either end. Nevertheless, I notice that a nylon hiking tent has been pitched on the empty trackway directly above the freezing tidal water.

A fourth crossing – an ornamental pipe bridge carrying gas into London from the Beckton works – is remembered by a solitary brick pier on the east bank. The tent shakes violently in the wind gusting downstream.

>> The island across the water, I discover, is not wilderness at all but a carefully managed ecology park squeezed, ingeniously, on to a teardrop peninsula inside a loop of the creek. A branch of the Docklands Light Railway splits the narrow bar in two such that the park appears, in places, to be merely an extension of the railway verge. The geography is hair-raising.

As I move along the island, deserted trains rush past on an elevated viaduct to the southern shore, where they appear to launch, unmanned, back across the creek, soaring like rollercoaster cars above the Lower Lea Crossing. The DLR track extends a dead-end railway siding marked on old maps and aerial photographs – the only visible feature of an otherwise muddy, contaminated wasteland. During the construction of the park in 1996, traces of mercury were detected in the ground, leading to the addition of an extra 40cm of topsoil.

Where the Olympic Park struggles to contend with the vast scale of the Lea Valley, the Bow Creek Ecology Park has the benefit of intimacy; it takes around 10 minutes to complete a circuit on footpaths brimming with red clover and ox-eye daisy. Locals appear alone or in pairs: a jogger by a reed-filled mere; two women sharing a spliff in a shady bower beneath the railway embankment. Small white butterflies explode from bushes as giant bumblebees stumble, nectar-drunk, amid the wildflowers. I disappear into the undergrowth for a piss and for a moment, in the darkness between trees, I could be almost anywhere but here.

>> An information board tells me how the park’s wetlands are fed by groundwater from a borehole sunk into the mud to a depth of twelve metres. A pump is used to regulate the levels in two ponds connected by a weir. Every September, an area of meadow is deliberately inundated ‘to mimic the natural flooding of a river floodplain’. Here, as Sid observed, the natural is artificial – a simulacrum of the real thing. But the human is also part of nature; we are hustling at the edge of the frame, observers of a world to which we, too, are subject.

>> I follow the path out of the park and along Bow Creek. In this corkscrew geography, the east bank is now west, and across the mudflats another peninsula emerges. In shape it is an inverse facsimile of the first, a little larger perhaps; but in place of the dense foliage of the ecology park it is crammed with towering modern apartment blocks. The sheet metal revetments have been capped with brand-new concrete blocks and stainless-steel railings on which two men in matching polo shirts are leaning.

>> In truth, there is nothing ‘flat’ about the mudflats of Bow Creek. They swell and heave with the submerged ruins of innumerable wharves and slipways, timber piles and river stairs – here folding and unfolding like a satellite image of mountains, here fractured by deep gashes filled with rubble, nails, car tyres, rusting exhausts, chicken wire, road signs, aluminium cans, traffic cones, shopping trolleys, waste pipes and, a little upstream, a large steel litter bin.

Everything that could have fallen into the creek has done; and everything that has done is covered in the same claggy, grey liquor. It is hard to resolve this hazardous, post-industrial topography with the upmarket development on the opposite bank. Unlike the upper reaches of the Lea, Bow Creek remains defiantly tidal. It is a dynamic environment that cannot easily be tidied away.

>> I cross a footbridge spanning the creek and City Island appears, as it is designed to, like a miniature version of Lower Manhattan. The name is a marketer’s invention – a place that is dense with history now reduced to its simplest forms. Island. City. City. Island.