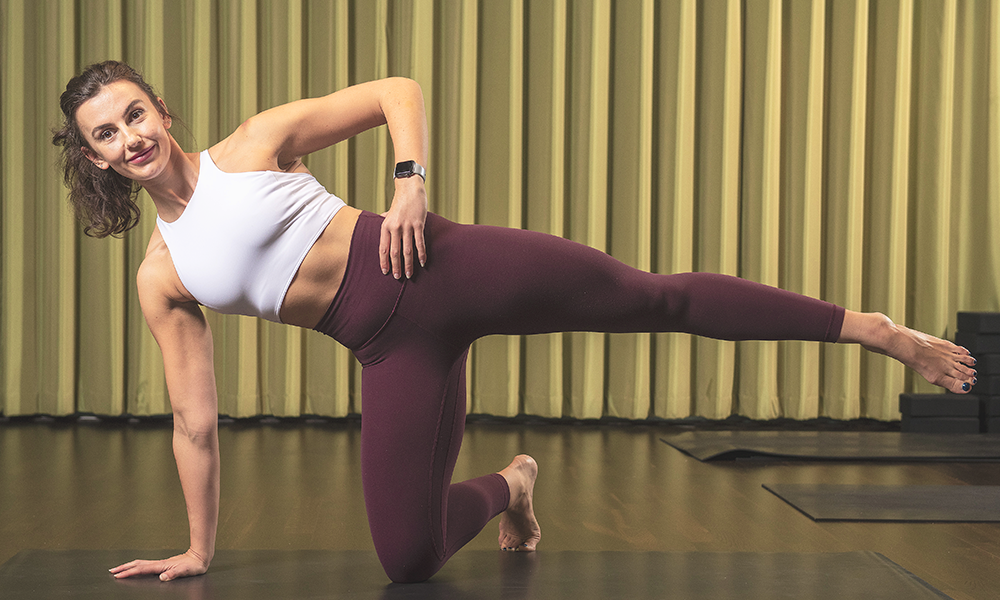 It’s January, the time when for reasons more traditional than functional, people take stock of their lives and pledge to make changes for the better.

But how to make those resolutions stick once the novelty value has worn off?

Wisdom is generally gained from experience, so a good starting point in any fresh venture should be to seek out the thoughts of those who are already pretty good at what you’re trying to achieve.

With the festive bloat at maximum, increased exercise is generally bobbing around the top of people’s lists.

But motivation can wane rapidly, so I sat down with Eve Powell of Third Space in Canary Wharf to discover her tips for sticking with the programme and how she personally stays in shape and maintains her enthusiasm.

A certified Pilates coach and group exercise lead instructor, Eve has been described as “the superwoman” on Trustpilot by a gym member, who praised her “meticulous performance on the gym floor and in classes”.

Having first qualified as a trainer while at university, Eve initially embarked on a career in the film industry before realising she got more out of her weekly combat class at the weekend than five days  spent on set.

“That’s when I made the transition to thinking I wanted to do it full-time,” she said.

“The main thing is the job satisfaction because we’re lucky to have endorphin-high, sweaty people telling us how great they feel at the end of a class.

“It’s a job where you help people and now, having got into Pilates, that’s even more the case.

“I’d never practised it before I joined Third Space – I’d done Yoga and thought it was basically the same – but my boss here asked if I wanted to go on a training course and I said yes because I thought it would be another skill to have.

“I’m so glad, because it changed my life and the way I train completely.

“Not knowing anything about it, I thought Pilates was good if you had a bad back, or if you were a bit older and your physio told you that you needed to do it.

“But I really fell in love with the history of it, the discipline and practice. It’s conditioning, building that strong, solid foundation for other exercises so you can run, lift weights and do Crossfit.”

Another key element to Eve’s approach to fitness is seeking out one-on-one expertise, especially for those new to the gym or branching out into new areas.

“Using myself as an example, I’m a coach, but when I decided to take up Olympic weightlifting I went to a personal trainer because I was a total beginner,” she said.

“I had a bit of a head start because of the endurance, flexibility and mobility I’d built up with Pilates, but I needed someone with that experience.

“For people who are new to the gym, maybe they don’t even know what their goals are, so I’d recommend having a session with a trainer and trying lots of different things.

“That’s why Third Space is a great place to start because there’s so much to choose from here. Then we have so many great trainers it’s easy to work one-on-one with someone on general fitness or on something specific.

“With weightlifting, it was a brand new skill to me and it’s so technical – I knew I would benefit from having the time and eyes of a coach.

“It’s also easier to commit and to work on smaller short-term goals in pursuit of what you’re trying to achieve.

“The trainer I see is on me to hit those targets. If you’ve got a good coach, invested in you, and you’re investing in yourself, it’s amazing.

“I have that one hour where it’s me and her and I’ve got a goal – snatching a particular weight or focusing on my hip mobility in my overhead squat.

“Whatever it is, it’s my time with that person and I call it my therapy. In between sessions we stay in touch – I send her videos of my progress and I really miss it if I can’t make a session. It really helps with motivation.

“It also helps me from a professional standpoint because my trainer will use cues and commands while I’m exercising that I find I can use.

“Even though the Pilates classes I coach aren’t the same, something that works for weightlifting might also work for me when I’m doing banded overhead squats with a group.”

From the other side Eve said one-on-one sessions gave trainers the chance to go into great detail with individuals.

She said: “You have more time to really look at a person’s body. You have time to ask the client questions and get their feedback, to find out where someone is feeling something and what it feels like for them.

“Initially, trainers use their first sessions to see how their client is moving, what their core strengths are and if they have any imbalances to address.

“It starts with identifying a goal – what the client wants to get out of their time with a coach.

“That might be to lose some weight, to increase their fitness, to tackle an injury or some pain they’re getting or to improve their posture.

“Then the trainer will come up with an individual programme tailored to achieve that. In general that will be a 360-degree approach that delivers a full body workout as a way of delivering those goals.

“It’s also great for trainers because after I’ve had a session with someone I’ve always learnt something.

“Everyone has a different body. A cue that might work for one person might not work for another so you have to be very adaptive.

“It’s a process of discovery, you have to make sure you’re using the right language.

“You might have a client who spends all day working at a desk and has no knowledge of the fitness industry so you have to find a way to communicate that makes sense to them.”

Personal training rates at the club are available on request, with a discount for new members on their first two sessions.

Group-wide membership for all clubs including City and Tower Bridge costs £210 per month.

New members get two guest passes, a meal or shake at Natural Fitness Food, 25% off their first treatment at the Canary Wharf spa and an ongoing discount of 5% as standard.

Read more: Why exercise should be like brushing your teeth