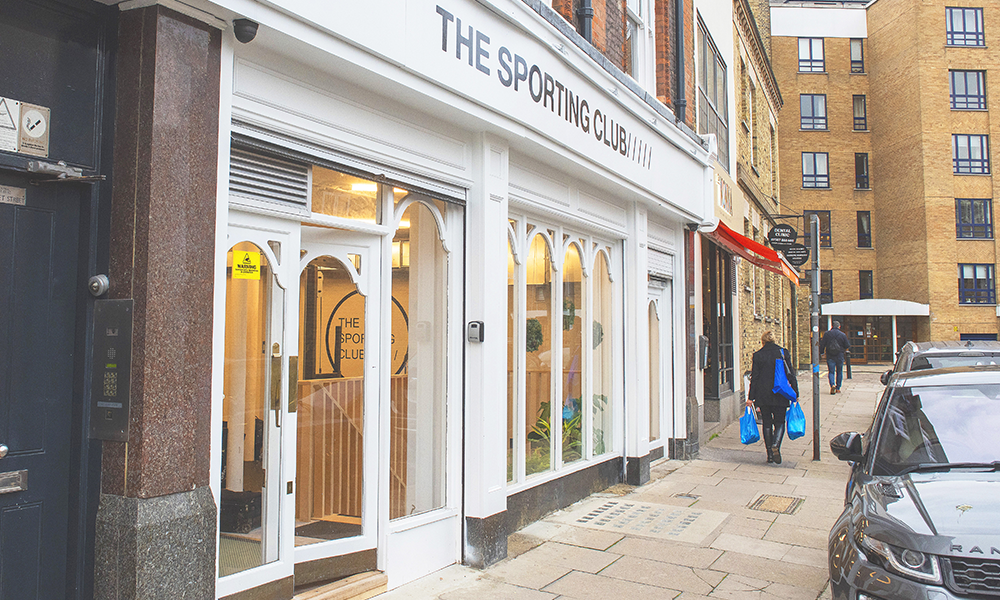 January is traditionally the month of knee-jerk reactions to the excesses of the festive season.

It’s not peak time for sign-ups at The Sporting Club in Wapping, however.

That usually comes in February as expert help is sought in the fitness field when it becomes clear abstinence and good intentions aren’t quite going to be enough to generate the honed body of desire.

While its personal training programmes aren’t cheap – a one-to-one session costs £80 for 60 minutes – founder Tim Keleher can promise a highly tailored service that has seen around 30% of clients working out with him or his trainers for more than 10 years.

“We’re realistic with people right from the start,” he said. “We set sensible goals that change over time.

“If people say they want a six pack then I’ll be honest with them and ask whether they’re willing to train six times a week, clean up their diets completely and not go out on a Saturday night. For many that’s a step too far.

“What our clients report after they start training with us is a general feeling of wellbeing. It might be that their sleep improves, their concentration at work is a little bit better or that they feel energised and are more likely to do healthy activities outside the gym.”

Originally from Melbourne, Tim made the journey to London from Australia at the invitation of his brother Jamie, who had more work than he could handle as a personal trainer.

While Jamie moved on from Wapping to Wimbledon, Tim stayed in east London, steadily building up his business at John Orwell Sports Centre before moving into his own premises, tucked away at Sovereign Close looking out onto Wapping Woods.

Seeking more footfall and greater prominence he’s now relocated the business to premises over two floors in Garnet Street, which has generated a stream of interest from passers-by, one of whom stops by during our interview.

“We are coaching based – that’s the fundamental difference between us and a mainstream gym,” said Tim.

“Our clients come and they are always getting coached – this isn’t a gym where you can come and do a workout on your own and we have to be clear about that.

“Predominantly people train here in one-to-one or two-to-one settings with a trainer. We also offer semi-private sessions for up to three people with a focus on strength training and classes, at the moment, for up to eight people.

“That allows us to bring in a few different things, such as Yoga, boxing and circuit training. Our clients will come in and do one or a combination of a lot of those.

“The first thing to say is we can train people of all levels but our typical client is someone who doesn’t have any  specific athletic goals.

“Most have busy lifestyles, stressful jobs and perhaps they haven’t been doing enough exercise and would like to lose a few pounds.

“But my youngest client is the 12-year-old daughter of a friend across the street who is doing some strength training with us and our oldest is a local councillor who is in her late 70s and we have everything in between.

“Most people who start with us stay with us, they love training and are loyal to us as a local business and I think that’s a good reflection of the service we offer.

“We have about 90 clients who are doing personal training with us and of those, 25 have been with us for more than a decade. I still have the very first client I started training at John Orwell.

“We always ask clients to commit to at least 12 weeks of training. It’s not a cheap thing to do, but if you want to get the most out of it there has to be an investment of both time and money.

“Generally, getting people to commit financially is a good way of getting them to do the work they need to in the gym.

“We do offer a bit more flexibility with our semi-private classes and group classes where session packs are available and people can purchase single sessions too.

“For the group classes we also do an introductory offer of three sessions for £30.

“Ultimately I think we’re a good place to train, but we won’t be everybody’s cup of tea. For that type of session, I want people to try one out and see if it fits with what they’re looking for.”

The Sporting Club’s core focus, though, is on personal training, with personal programmes created for each client according to their needs and individual goals.

“I think what sets us apart is the quality of the trainers we have here,” said Tim, who grew up playing a range of sports before discovering a passion for weight training in his late teens.

“Unfortunately the quality of personal trainers in the industry as a whole is not very high – it doesn’t take much to get your certificate and you have providers of those courses who want to make it as easy and accessible as possible to get those qualifications.

“But what you learn in many of those courses does not give you the skills to be a personal trainer.

“It’s a first step and everyone has done it, but learning the process of becoming a trainer, knowing how to read clients and to write really good programmes for each individual – that takes time.

“A statistic that is probably a little old but still rings true is that two thirds of personal trainers are out of the industry within six months.

“They get their certificate, they try to make a living out of it and within six months they can’t and then they’re out. It’s a massively high turnover.”

Staff at The Sporting Club are selected based on personal connection or recommendation and have to go through a rigorous interview process, which includes writing a programme for Tim and coaching other trainers under scrutiny.

“That enables me to see what their skill sets are like and how they work,” said Tim. “It also ensures that I’m comfortable for them to start seeing clients.

“We currently have six other trainers here apart from myself, including Justin Lam who I’ve been working with for more than 10 years after meeting him on a course.

“That expertise is essential because, having worked eight years in a public gym my opinion is that most people don’t know enough about exercise to do it by themselves and get results.

“They might have the best of intentions but don’t know how to put exercises together to get the most out of their workout.

“For a lot of our clients, having a set time in their calendar when they’re accountable not just to themselves but to us, is motivation enough.

“And that’s the first step. You have to show up every week – it’s a game of consistency. Then we’re very good at designing programmes, asking what a client’s capabilities and goals are and bringing the two together for them.”

Part of the service is having a facility and equipment capable of delivering and from its clean, white shopfront to its banks of free weights, cable machines and basement studio, The Sporting Club is comprehensively kitted out.

“I like my toys,” said Tim. “Take our set of bars, for example. We have a lot of different ones that you would not see in a mainstream public gym.

“They will probably have a standard Olympic bar and nothing else. Mainstream gyms are usually a little behind what studios like us are doing.

“But the reason we have these things is to ensure we can safely do different types of exercise with a wide range of clients.

“Our latest piece of kit is called a belt squat machine, made by a company called Primal. Because you’re loading around your back this is a really easy and safe way to coach squats.

“I’ve only had it for four months but it’s quickly become the most versatile and most-used machines we have because it allows people a greater range of motion.

“We also have our track – a must for personal training studios if you have the space.

“It’s where we load up push sleds or pull sleds and you just get people dragging weights, which is a great way to build leg strength.”