This moment represents something of a tipping point in the regeneration of Greenwich Peninsula.

There are still 20-odd apartments left in the Upper Riverside phase of Knight Dragon’s mammoth project, so for buyers this is a last chance to get in on one of the angular blocks set along the Thames.

“That’s really been our focus for the last four years, with just over 1,000 properties and it’s very much an established community now,” said Kerri Sibson, chief operating officer at the developer.

“We launched the last building – No. 5 – just as we went into the first bout of Covid, so things stalled for a little while and then subsequently picked up.

“We have a few one-bed and two-bed homes available, so this is a last chance to buy.

“There’s a really strong sense of community across the five buildings at Upper Riverside, which is really lovely and, of course, that’s what you hope for – people who will occupy the space and make it what they want it to be.”

Homes at No. 5 Upper Riverside start at £487,500 with residents’ facilities including access to a co-working space, three gyms, multiple roof terraces and a 15th floor swimming pool.

For those who’d rather rent, No. 4 Upper Riverside offers studio, one, two and three-bedroom homes to let with starting prices ranging from £1,500pcm to £3,000pcm, a selection of contract options and the option to move in without a deposit.

“The rental operation has had a full year now and the rental market is booming, so that has performed really well for us and we’ve been really pleased,” said Kerri.

“Having that option is part of what we talk about all the time for the Peninsula, which is that you need diversity of product to keep your audience as wide as possible.

“If you have just one type of property, it quickly becomes a not very interesting place to be. Rental gives us a different clientele and it definitely feeds into our sales business.

“We haven’t been able to do it yet, but we might be on the cusp of seeing if we could do ‘Try before you buy’.

“I’d like the idea that we could have a rental offer which ultimately means that the money you’re spending on rent becomes a deposit and – although it sends our finance department into palpitations – it would be wonderful if we could achieve that.

“On the sales side, having Lower Riverside has always been the perfect counterpoint in terms of accessibility so we’re not just offering one price point.”

Knight Dragon’s approach to making sure the area it is creating appeals to buyers somewhat sets it apart.

The company has invested significantly in public space as well as an ongoing programme of art exhibitions and events, intended to attract visitors to the area and entertain the now circa 5,000 residents.

That includes the creation of The Tide – an elevated park complete with sculptures including a work by Damian Hirst.

Knight Dragon has also worked to help establish local businesses to serve those passing through, studying and living on the Peninsula, opening a diverse collection of commercial buildings at Design District in 2021.

“That’s been a great success for us,” said Kerri. “It was enormously stressful for all parties getting it launched post-Covid.

“We had businesses really excited and ready to move in and we were behind because everything had been closed for many months, but when it arrived it exceeded all out expectations.

“When we launched, we had a journalist from the BBC asking whether we were worried about people not returning to work, not coming into the office – but that’s hasn’t been our experience.

“We have such a great mix of tenants in the creative industries and they were just really desperate to get in, to collaborate and to feed off each other.

“I’ve been working on this project since Knight Dragon got involved and I’ve found that if you engage with the creative industries early on in any process, the product you come out with is so much more interesting and challenging than if you stick to a very traditional property route.

“You can end up with a very homogenised product with ‘Do Not Stand On The Grass’ signs. We didn’t want that here.”

With a total of nearly 17,500 homes in the pipeline, both residents and visitors can expect to see a ramping up of activity, as Knight Dragon prepares to announce the next phases of its project later in the year.

“We’re probably around the 30% mark in terms of completion, so there’s still an awful lot more to do,” said Kerri.

“We’ve just announced a partnership with construction firm Mace – which built Upper Riverside and The Tide – and there’s a big push forward in terms of momentum and speed of delivery. There are going to be lots of homes on their way very quickly.

“In the last four or five years, we’ve been very focused on place-making.

“The river bank, back in the day, was a desolate tarmac path that ran along the Thames, so we invested in The Tide to get people to enjoy the area.

“It was important for us that Greenwich Peninsula was not just about homes, but a balance between home and work and a place where people would want to spend time during the day.”

With Mace set to build 20 buildings as part of Knight Dragon’s 40-acre project, the exact shape of the final development cannot be set in stone.

“From an infrastructure point of view, it’s a constant game of moving things around,” said Kerri.

“When we started the project, the Silvertown Tunnel hadn’t been given the green light, so two of our buildings won’t be delivered because now that’s very much happening.

“It’s also absolutely our ambition to redevelop North Greenwich station, although we weren’t able to make our original plans for that site work.

“However, it’s important to remember, from a residents’ point of view, how well connected the Peninsula already is – London City Airport, for example, is a big plus for us.

“There’s a perception Greenwich is further away than it actually is, but once people are here they realise how well connected it actually is – just minutes from Canary Wharf and the City.”

Read more: How Urban Space Management wants to put homes on a bridge 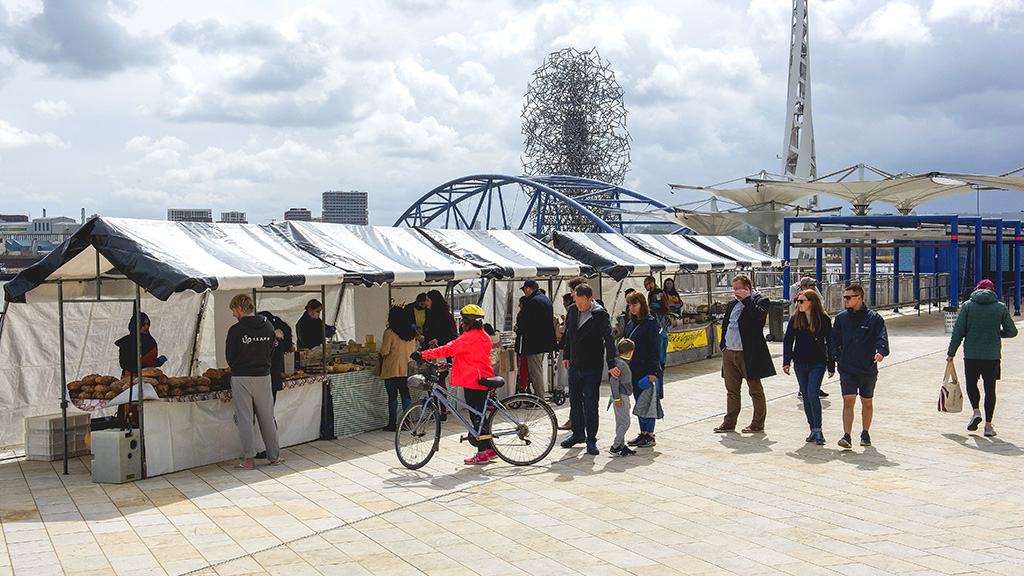 A clutch of food traders are plying their wares on the banks of the Thames as Greenwich Peninsula hosts Flow Farmers Market every other Sunday. With the next one set to take place on June 13 – and with dates running throughout the summer until September 19 – we caught up with the organiser and stallholders to discover what residents and visitors can find on the strip of land between the end of The Tide and the river.

“So we worked with creative food firm Bompass And Parr to develop an idea about what that could be for the Peninsula – to bring a range of fresh produce, organic meats and cheeses here. Flow is inspired by the river itself, its location and, as it grows we really want to feature local producers.

“We want it very much to be for the residents here so it’s about what they want and need – that’s what will drive what we have here.

The idea is the selection of traders we have at the moment goes really well together with organic bread, cheeses, olives and meats.

“It’s gone down really well with residents so far and the stalls are also near two of our retail tenants – Choy House and Ardoa – so people can visit them too. We want to enliven the river and celebrate the resilience of our community after the pandemic.”

Flow Farmers Market, programmed by Urban Food Fest, takes place every other Sunday from 10am-3pm. Here we talk to some of the traders taking part:

Oh My Sugar owner Aysar Kalkanel said: “I started the business in 2020. I’d been travelling and I wanted to come home and open a brunch bar, but I arrived back just as we went into the first lockdown, so I had to think of an alternative.

“I’d never baked before, but it blew up completely. Originally it was going to be more about sweets, but everyone kept ordering the brownies and cookies.  We started doing just online and then a couple of people suggested markets and it’s been the best thing I’ve done.

“We mainly sell cookies, brownies and blondies which is a version of a brownie made with white chocolate – they’re very sweet, but people love them. We basically offer a variety of chocolate-smothered goodness.”

Oliveto’s Samaneh Khazaei said: “The business has been established for almost 12 years now. We marinade everything ourselves and source our olives from Italy, Greece and Spain.

“All of our products are homemade and sold freshly at markets, whether it’s the olives or the hummus.

“Our flavours include olives flavoured with mixed fresh herbs and chilli. We are also selling Persian garlic and artichokes. We don’t use vinegar or salt in our marinades, just extra virgin olive oil. We also do vegetarian stuffed vine leaves.

“Personally I love our olives stuffed with almonds and anchovies – they’re really tasty. I also have to mention our hummus, which is delicious.”

Pick’s Organic Farm’s Hannah Patterson said: “The farm is based near Leicester in Barkby Thorpe and we come down every Saturday and Sunday to trade at farmers’ markets in London.

“We do a range of hot food – cooking sausages and bacon at our stall – as well as selling meat, fresh eggs from our chickens and fruit and vegetables too, although not at every market.

“All the meat we sell is produced from our own animals. We have a variety of sausages including Welsh Dragon, flavoured with chilli, a good selection of beef, lamb and chicken as well as burgers – a bit of everything you could want, really. We sell burgers, hot dogs, bacon rolls and egg rolls or any combination customers want.”

The Big Wheel’s Hazel Cross said: “We specialise in artisan British cheeses, which come from up and down the UK. For example we stock Lancashire Bomber, Colston Basset Stilton and Keens and Montgomery’s cheddars plus Lincolnshire Poachers and Cornish Yarg.

“We also have an international classics section because there are certain things that no cheese board should be without. Our customers come and they want a Parmesan or a Langres, which comes from the Champagne region of France and has a lovely orange colour. My personal favourite is the Ribblesdale Goatesan, a hard cheese from Yorkshire.

“The Big Wheel exists only at markets in London and that allows us to keep our prices competitive.”

Rodgis’ Kudciea Khan said: “We offer a range of sourdough bread with loaves for £4 or, if someone wants two, it’s £6.

“There’s rosemary, olive bread, rye and multiseed on offer. The products are all freshly made at a central kitchen and  and we have savoury food and pastries as well, including chocolate cheesecake and pasteis de nata.

“We’ve been really busy at Flow, with people queuing despite the rain and we hope to add even more products to our stall here.

“Rodgis is a family business which operates at various farmers’ markets around London and via its website.”

The business also produces a range of charcuterie, pastas and olives available to purchase online, shipped from its base near Peckham