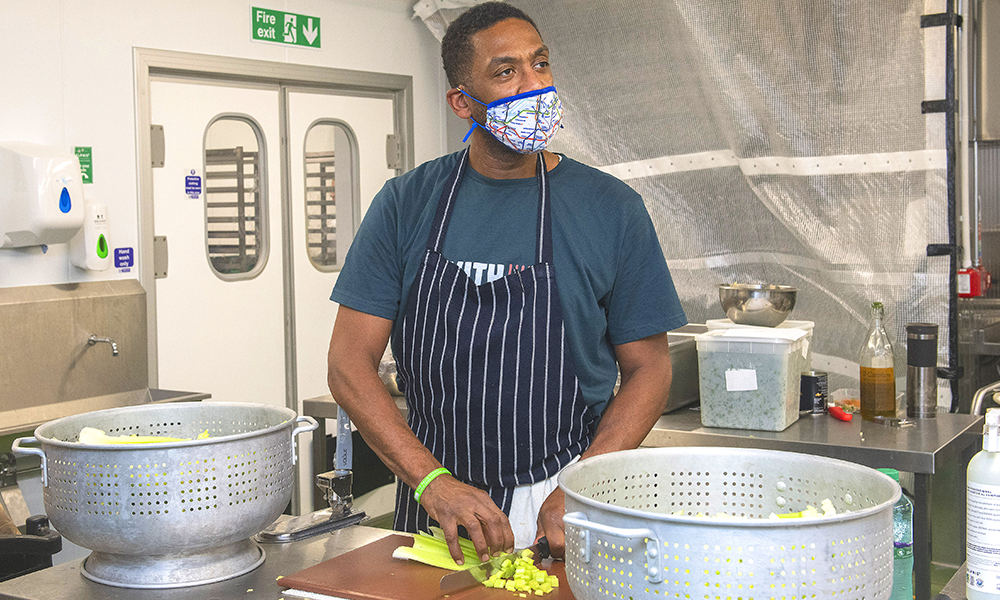 Felix’s Kitchen does an incredible thing. Recently opened on an unassuming industrial estate in Poplar the 4,400sq ft facility is ramping up production with the aim of eventually producing 6,000 meals a day using surplus ingredients from supermarkets, wholesalers and restaurants – most of which would be thrown out as they near their sell-by date.

Those meals are then distributed to people who need it for free, via a network of organisations and charities across London.

People are hungry in the capital and cannot afford to buy food. The hard work of staff and volunteers at the kitchen goes some way to addressing that, but The Felix Project – the largest food redistribution charity in London, which operates the kitchen – expects a spike in demand in the autumn as furlough comes to an end and potential benefit cuts bite.

It’s 2021. The UK was the fifth largest economy in the world in January.

That such organisations exist at all is a damning indictment of those managing our society.

That more and more people are expected to need their services is a shameful failure of that governance.

But there are mouths to feed right now and those doing the hard practical work to achieve that end deserve our support and admiration for spending their time on this planet compassionately helping others.

Take Leon Aarts, for example. Having “rolled into hospitality by accident” at age 19, the Dutchman became a chef, rising through the fine dining world to win Michelin stars before moving to London to start a high-end food wholesale business for top restaurants in the capital.

A change of direction followed in 2008 when he decided to close that business and create a charity with an initiative that saw diners pay 15p extra in a restaurant to feed a child in a developing country.

He went on to cook for thousands of migrants in the camps at Calais.

Just before lockdown, he set up Compassion London to cook for those without food in the capital as the pandemic hit, eventually using Wembley Stadium to produce around 5,000 meals a day.

Having joined up with The Felix Project, right now he’s in Poplar, cooking with 12 staff and a group of volunteers as head of Felix’s Kitchen – located next door to parent charity’s latest warehouse and distribution centre.

“It’s terrible that people live in food insecurity, but we can’t let anyone go hungry while those who have the resources are figuring it out – whether that’s the Government or companies,” said Leon.

“I think we can solve this problem if we work together and it’s a disgrace that so much perfectly good food goes to waste.

“The Felix Project gets surplus food from more than 500 businesses, whether that’s small shops or Amazon, Hello Fresh and Ocado.

“It’s really good produce, often close to its ‘use by’ or ‘best before’ date, which means you can’t sell it any more. But that doesn’t mean there’s anything wrong with it. It’s then distributed to almost 1,000 charities all around London who give it to people who live in food insecurity.

“For example, many workers just before Covid were made redundant – people who were living from pay cheque to pay cheque.

“You can see, as you drive round east London, that so many people fall outside the system, and we allow it to happen – with ridiculous wages, not giving people any sense of security.

“Many people in the capital get paid really, really, well, but a lot of people don’t – it’s almost impossible to live in London on a wage of £7 or £8 an hour.

“A few weeks ago I had a charity kitchen doing what we do here and, in talking with The Felix Project, we found funding to create this purpose-built kitchen in Poplar – we’re building up to do 6,000 meals a day, but it takes time.

“I have very experienced chefs, so they look at what comes in and they make meals out of it. We always try to do a variety – it’s crucial we do both nutritious and delicious meals.

“That’s very important to me because when people are not in a very good state, they tend not to eat so well – if you have mental health challenges, eating is not at the top of your list of priorities and they don’t even realise it, so we will be working with nutritionists to help us improve what we produce. We always make sure that there’s protein, whether meat, vegetarian or vegan.

“We’re also guided by the surplus we have – one of our remits is that no food should go to waste, which is a very interesting challenge.

“Right now we are actively looking for volunteers, especially local people, because we serve the local community.

“Also, if local companies have surplus food, then they should get in touch with us because we don’t want any food to go to waste

“We can put it to good use, re-purpose it and give it to the people who need it. We have the resources for that – warehouses, where we can collect the food, sort it and turn it into meals.

“We get black crates from Amazon, for example, that have all different things, and we separate it out. If you’re a small business, then give it to us rather than put it to waste.

“Bigger companies that produce food for supermarkets often have a lot of waste – often it’s not their own fault. For example, if it’s going to be good weather, a firm might make a lot of barbecue packs and then it rains and suddenly they don’t sell anything. But if they don’t put it in the bins and bring it to us we can do something with it.

“We talk to our suppliers, of course, to ask if they have any of a particular ingredient but we’re especially short of staples – rice, pasta, tins of tomatoes – that sort of thing.”

The Felix Project was created in 2016 by husband and wife Justin and Jane Byam Shaw, inspired by the compassion of their late son Felix, who died suddenly from meningitis in 2014.

You can find out more about the charity and volunteering in east London online at thefelixproject.org.