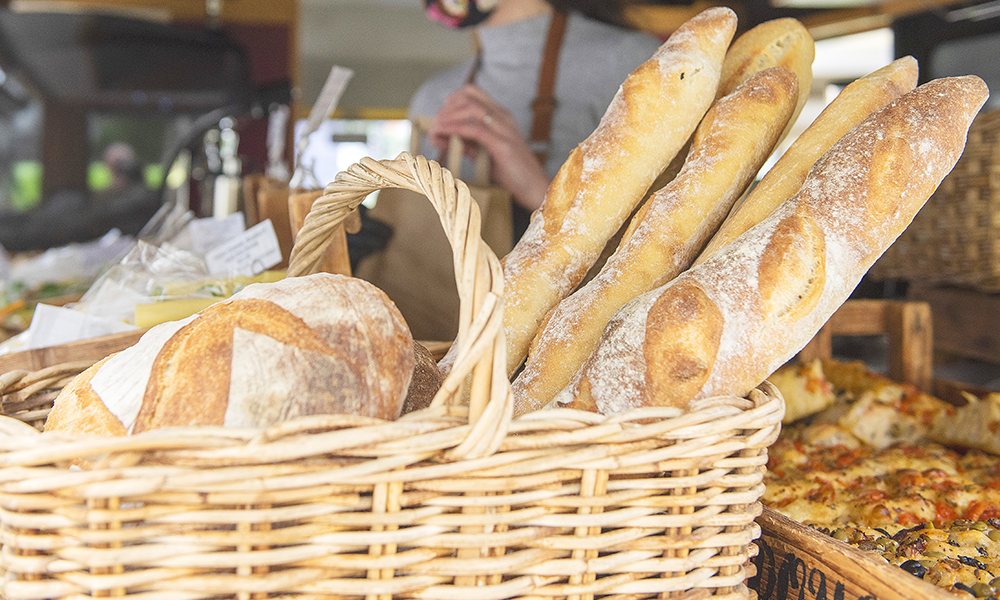 Parents of six, Robin Weekes and Clare Kelly, say their youngest and most temperamental seventh “child” has been the hardest to raise.

They went from launching at the London 2012 Games and finding success selling their products at markets to striking out on their own at Thomas Moore Square in Wapping.

Now they have entered a new phase of the business with a food van at London Dock, selling their sourdough loaves, filled baguettes and cakes. There are also plans to expand into coffee and toasties.

Robin said through the whole journey, one thing had remained the same – their doughy child – a 20-year-old mixture of water, flour and salt that needs constant attention.

“Sourdough is the best bread in the world and it’s made from only three ingredients,” said the 58-year-old.

“But you have to look after your starter every day or it dies. I have taken it through customs, on aeroplanes and on holiday.

“The flour ferments and has a bacterial culture in it and a wild yeast culture that makes the bread rise. It’s massively temperamental and takes so long to get it so you can make real sourdough and not use commercial yeast.”

“It’s amazing when you see it bubbling and growing. When Robin started it was like a science experiment and he had pots and jars of starter around the kitchen that would hiss and sometimes explode.

“Everyone who came round the house had it shoved in their face to smell.”

Robin rises at 5am every morning to tend to his creation, heading to the bakery expansion on their home in Vaughan Road, which they built after landing £20,000 contracts for the London 2012 Games.

“I was a social worker in child protection for 20 years and bread making was an obsessive hobby,” he said.

“I was so into sourdough from when it first became popular. I built a brick oven in the garden and started making it with the kids.

“I made it for charity and people started wanting to buy it. Then I saw an advert in East End Life for the Olympics, looking for local producers.

“I made an application, very naively as we weren’t a business – we were just doing market stalls on a Saturday.

“We won two contracts for the corporate events for three weeks of work, despite competition from Angela Hartnett, so I gave up social work and set up a bakery.”

From there the couple were invited to sell at St Katharine Docks market with Clare stepping naturally into the business side of the partnership and fitting running the stall around looking after their children.

The 55-year-old said: “We had just had our sixth child when we launched the business and I think we were quite lucky in our relationship that I was able to stay at home and Robin was the breadwinner.

“It all happened accidentally really, our youngest was two when we got the opportunity to do the market at St Katharine Docks and these were always in school hours so I could drop the kids off and then pack up in time to pick them up.

“The people who used to run the market owned Partridges food store on the King’s Road invited us to do their Saturday market, which we did for seven years and really gave us a boost.

“We did 10 different breads then and that was a lot harder for Robin because we would start on the Saturday evening, mixing the doughs and going right through to Saturday morning baking.”

So, the obvious question is, which is harder – making sourdough or raising six kids?

“Well I wouldn’t have got up that early for the kids and Robin never had to,” said Clare.

“I used to breastfeed and they were all in bed with us when they were little so he never had to wake up at all.

“But now he has to get up at 4am so I would say the six kids are easier.

“One changes your life completely and two seems like hard work because you can’t split yourself. After three it doesn’t make any difference.”

Robin stayed diplomatically silent but said making sourdough was much less demanding than his previous career.

“It’s so ancient and there is so much respect for bread,” he said. “What I can’t get over is the amount of respect people have.

“I was a senior manager in social work and I think I get more kudos now for making the bread than I ever did as a social worker.

“It’s really important to people and our culture. I’ve had kids round from the local school, teaching them about bread and how to make it.”

He is keeping the secret of his sourdough to himself but said: “I can only make the bread I do now because I have been doing it for 20 years. It takes that long.

“It’s something you have to judge all the time because we don’t have temperature controls and proving machines like in a professional bakery so you have to change what you are doing throughout the year.

“Now winter is coming the bread tastes different and every loaf has a  varied flavour, which is what I love about it. You are not just churning out the same thing every day.”

Robin said his bread didn’t taste like any other in the world because people were imbibing the very essence of Wapping itself.

“When you start learning about yeast you realise that it’s everywhere – pretty much on everything, on us and just flying around.

“That’s where the name Wapping Sourdough comes from – the flavour of the bread is unique to wherever it’s created. You can’t recreate San Francisco sourdough here because the yeast is latent in the air. Hence why we’re Wapping Sourdough.”

The couple, whose other hobby is performing in panto for their local church St Patrick’s, had a crisis last year when flour supplies dried up during lockdown.

Clare said: “Everyone was going crazy buying supplies and we thought we would be stopped in our tracks. We just couldn’t get any.”

Luckily they managed to get a direct supply from Wright’s Flour and carried on. But Robin said the pandemic saw sales plummet from 150 baguettes a day to nine.

They survived by launching a home delivery and a pizza service but have now stopped those to focus on trading with the van.

Robin said: “Now we’re in the right place at the right time and it’s a really good deal for us. We want to take it forward and try to add to our repertoire.

“It’s got a coffee machine and electricity which opens up a world of opportunity for us. We’ll be starting to do Vagabond Coffee, sourdough melts and who knows what else?

“I still love that it seems like a really honest transaction. We make something, people give us money for it and we can make a living from that. It is stressful in terms of it being hard, physical work but there isn’t that mental stress behind it.

“We had the philosophy right from the start that we would only buy equipment once we had earned the money for it rather than paying it back later.”

Clare was previously out in Thomas Moore Square with a gazebo or umbrella and constantly watching the weather forecast.

She said London Dock bosses invited them to take on the van and have made it an easy transition for them.

Bake Off fan Clare hopes it is a step towards an easier life as she dreams of one day owning a shop.

“So far the business has really fitted in with our lifestyle, we could take time off for trips and assemblies, but now the kids are getting older, I would like to have a shop so we get other people who can do our jobs if needed.”

Robin, who reckons he could get a handshake from Paul Hollywood, but prefers Masterchef, said: “I’m quite happy.

“Even though it’s been a long time I still feel very lucky to be able to do it. We still have two kids at home and I work from home and still get to spend a lot of time with them.”