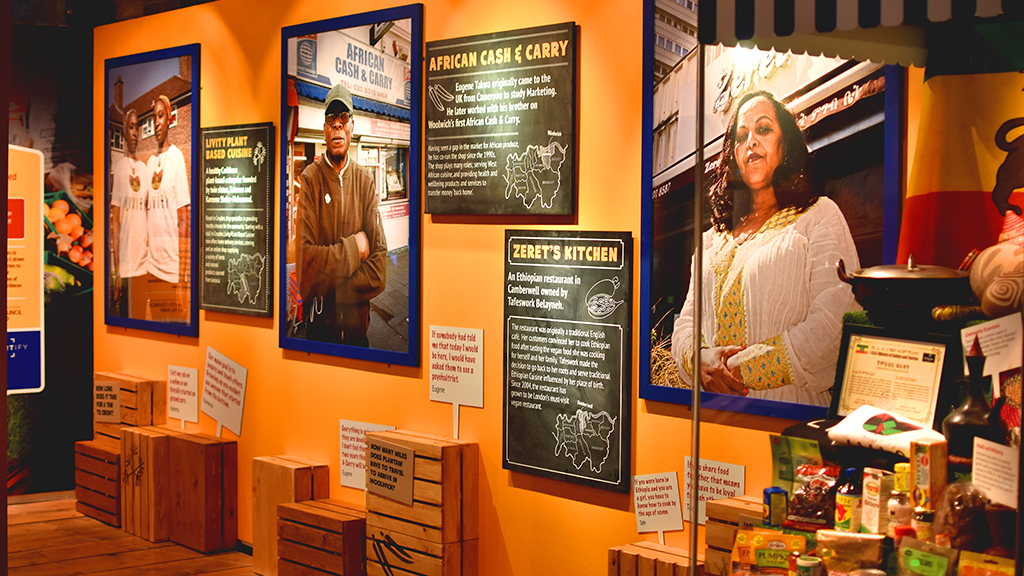 Walk over the floating green bridge from Canary Wharf to West India Quay, turn left and, just behind a now vacant pedestal, you’ll find the Museum Of London Docklands.

Head up to its London, Sugar And Slavery gallery and, provided you visit before July 17 next year, you’ll find a bright orange corner dedicated to Feeding Black.

The display, which opened to the public this month, examines the role played by food in black entrepreneurship and identity in south-east London.

Focusing on four businesses – Livity Plant Based Cuisine in Croydon, Zeret Kitchen in Camberwell plus Junior’s Caribbean Stall and African Cash And Carry, both in Woolwich – it explores how they act as much more than suppliers of goods and services to their customers, as spaces to talk and express politics, culture and heritage.

Community history curator Aleema Gray said: “One of the things I’m really interested in is looking at alternative knowledge – what it means to represent in terms of curatorial displays, and that was the motivation behind this exhibition.

“It’s about alternative ways of knowing. For instance, we’ve recently had an upswell of looking at black British history. But, when you go into the community, there’s oral history, the things that are left outside academic textbooks. Curators are typically seen as people who conserve this kind of academic knowledge.

“What’s interesting about this project is looking at the ways alternative knowledge can be used to make certain interventions in the role of curator – it sounds wishy-washy, but it is essentially asking how we can include multiple different perspectives and narrative experiences in our displays? I put a call out, basically asking: ‘What are contemporary black experiences?’. Some people said, ‘my kitchen’ or ‘the barber shop’ and one person put forward an idea she had, which she referred to as the ‘black economy’.

“She’d been looking at black-owned food businesses as part of her research, focussed on African Cash And Carry – interviewing people that came in – and discovered these spaces were about more than just commercial gain. They were for politics, culture, sending money back home and buying food. There was even a little restaurant – a multi-dimensional space.

“I wanted to explore that a little bit further, so I took that and thought about what the next step was for this kind of research and put forward a proposal for Feeding Black – which takes the element of looking at not only community spaces, but also interrogating power, because a lot of the conversations when we did the initial oral histories were talking about what it means to be in London today, to survive and thrive, to start a business, the challenges, the setbacks, but also stories about being part of a diaspora.

“Apart from one, all the people featured in the displays were born outside London – one in Ethiopia, one in Jamaica, one in the Congo, one in the Cameroons, so a lot of this is entangled with questions of migration and so on.

“That’s how the initial idea came about, but the area I work in, Curating London is very much a participatory project – we place a particular emphasis on being on the ground – visible outside the museum – and asking what a museum wall is.

“We had to re-jig things a bit because of the restrictions around the pandemic, but essentially the main exhibition deals with four black-owned food businesses, their oral histories and the objects that they put forward reflecting their place. It also looks at different themes of food including health, the different objects you find in kitchens as a place of work but also the nutritional value of ingredients and dishes and we’ve got a recipe wall as well.”

In her role, Aleema has a particular responsibility for the London Sugar And Slavery Gallery in which the exhibition sits.

She said: “Since the gallery opened it has been shelved a little bit, so my responsibility is to try to re-mobilise certain conversations, make some interventions to think about how we develop, and take that gallery a little bit further.

“Feeding Black sits in the wider gallery, because I wanted to do something in response to the ways in which Docklands has been developed as a direct result of the plantation economy.

“For me, food acted as a perfect segue to think about London, Sugar And Slavery, not only in terms of the content of the exhibition, but also the visual design.

“This exhibition is very much about the process as well as the content, as is the wider gallery.

“Feeding Black was about using that space as a vehicle for community engagement.

“It’s also not necessarily a chronological history – it draws on certain themes and it puts forward not necessarily answers, but asks questions about the legacy of this history and how we are all implicated in it. Feeding Black tries to speak to that.

“In the crates under the wall display, for example, you have certain questions, such as: ‘Where does our food come from?’

“It’s very subtle, but it helps people to think about the legacies of migration, enforced or otherwise.”

Aleema, who is currently finishing a PhD on the documentation of a community engaged in the Rastafarian movement in Britain, said it was weird to talk about herself as a curator.

She said: “I didn’t go to museums as a young person because I didn’t see myself or my history reflected in these spaces but something I’m really passionate about is curating history from below – the silent histories, the hidden archives – I’m a historian.

“There’s this idea of what history is in schools – the Romans and the Tudors, for example. I feel there’s a need to show that history is dynamic, it’s a verb, and that started my work to see how we can bridge this gap. This is what I’m doing as a curator and an academic – situating myself as the outsider within.

“The Museum Of London and museums in general are making a strong effort. There’s a lot more work to do but we’re definitely on the right path.”

The museum is free to visit and is currently open from 10am-5pm Wednesday to Sunday.