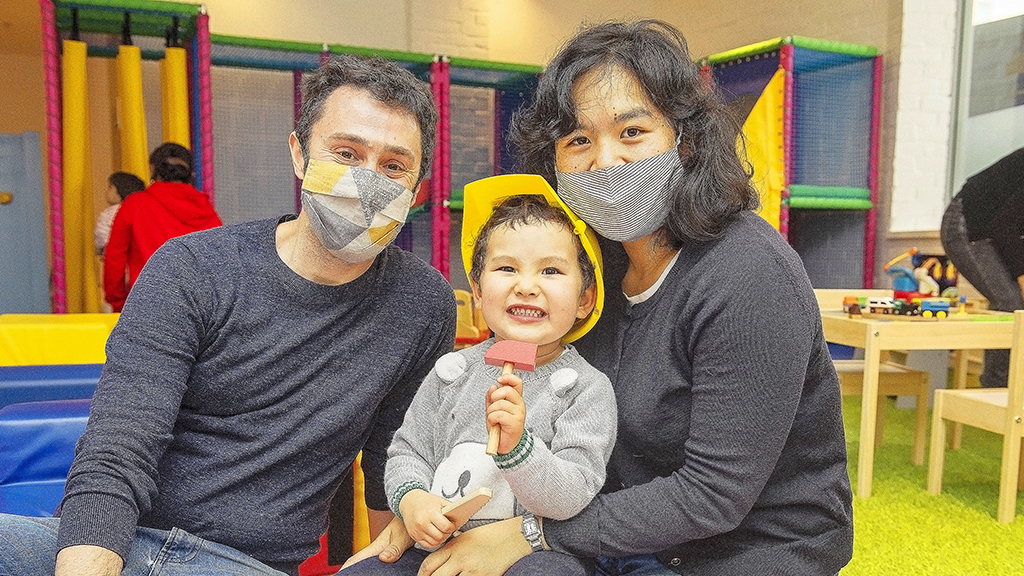 An indoor play area filled with things to climb, slide down and play with sounds like every little kid’s fantasy. And three-year-old Nico Reckers-Ng is lucky enough to have parents who have made that dream come true by opening Tiny Tigers Cafe.

Set in South Quay Plaza, the soft play fun zone is inspired by their son’s favourite things and the principles of Montessori, which encourage less noisy gadgets and more open-ended play.

The bright, spacious unit is filled with padded structures to climb and slide down, but also a host of mostly wooden toys and puzzles chosen to foster independent and imaginative play.

“There might be the occasional electronic toy but most of what we put in is supposed to try to create this environment where we switch off from electronics and move towards this organic, natural heuristic play that children learn and develop from,” said mum Elaine Ng.

“There is a sensory mirror and balls, trains, instruments, some books and I play piano for the children, so we have impromptu sing-a-longs.”

Nico gets to run amok in the play area when it is not in use and joins his mum for sessions, which has helped her stick to limited screen time during the pandemic.

Following Montessori ideals, TV is a rare treat and even during lockdown she avoided working in front of him, instead logging on after he went to bed and working until 1am to catch up on various tasks and cafe logistics.

“If I’m on my computer he just wants to climb on my lap and see what I’m doing,” said the former coder, who now works in wealth management for an American bank. “I try not to show him stuff on my phone either, so he doesn’t think it’s this amazing YouTube box.

“It’s tough because sometimes you would love to just throw them in front of the TV but, what I have found is, it’s quite addictive and they will ask for more and, if you try to engage with them, they are not interested.

“Whereas, when I’m playing with my son, he’s making things up and there’s a much more natural type of development that happens.

“I completely understand why people use TV and there’s no judgement at all, but we didn’t have TV for thousands of years and now when I’m on the tube and everyone is on their screens, I wonder what that means for social interaction and behaviour.

“Social media will have a lot of responsibility for the mental health of our children, things like filters and how quickly they grow up, scare me.”

Elaine wants Tiny Tigers to help children become interested in the world around them. Classes in baby massage, baby sensory and Frog Prince music sessions have just launched and she is planning special events to celebrate the area’s multiculturalism, such as marking Eid and Black History Month.

Elaine is Malaysian Chinese, her husband, Thomas Reckers, is Czech German and the couple would love to bring their cultures to the cafe through language classes.

“I love London because it is so multicultural,” said Elaine, who grew up between the capital and Malaysia.

“If you move to France you become French whereas in the UK you grow up being British but being aware of your own culture because we celebrate Ramadan, Eid, Diwali, Chinese New Year all these things. When I’m in London it doesn’t matter that I’m not white and I think that’s important for my son. I don’t want him to feel like an outsider.”

She and Thomas both work full time in finance and run the cafe in their spare time. And there have been more than the usual fun-filled ups and downs at the play area. The business was two years in the planning and finally opened last October, only to close again for five months when the second lockdown arrived.

It reopened again on May 17 with sessions limited to eight children and 45 minutes so staff are able to clean the play equipment thoroughly between each use.

“Nothing ever happens overnight is my long lesson after this,” said Elaine. “It’s been a huge learning curve and very hands-on, which we can do because we only wanted to open one place. If we were a big chain we would have just thrown money at it.”

The couple are running the cafe as a passion project rather than a money maker and Elaine said: “We would like it to break even at least, because we have put a lot of money and time into it. But, for us, it was more something that fitted into our philosophy of how we would like to bring up our son.”

Elaine said they wanted to keep costs down to make it as accessible as possible and help address the lack of facilities for the growing number of families on the Isle Of Dogs.

“Pre-maternity leave, I thought I would travel all over London with the baby, because that’s what I did before,” she said. “Actually, about 15 minutes from the flat was my maximum journey time. I was really disappointed by the lack of options on the island.

“In Canary Wharf the businesses are geared towards office workers and there’s not much space for prams, which I understand because they have to make their rent. I think people underestimate the number of families that are in the area and the infrastructure for them isn’t as strong here.”

Finding a suitable unit was a big challenge as the couple wanted to open something locally.

“Prior to Covid, I used to take Nico to central London for the Royal Opera House ballet class and its opera class and we would go to museums, art appreciation sessions and they were brilliant but just so much work,” said Elaine. “It was three hours of planning for a 45-minute session. We just wanted something more local.

“We wanted it to be financially viable, but also for the quality not to be compromised – that’s very important to me.

“Every time we do something I think: ‘Would I be comfortable doing this with my son?’ If the answer is no, then I don’t want it in my unit.”

Elaine spent two years visiting play areas with Nico – Tiny Tigers encompasses all the elements he enjoys but also thoughtful facilities for adults. Aimed at kids aged up to five, it includes dedicated buggy parking, adult and toddler toilets and a separate changing room with a waist-level counter that has walls on three sides so babies can’t roll off.

Adult and child tickets cost £7, with non-crawling siblings allowed in for free. If children are old enough to play independently, parents are encouraged to sit in the cafe area and have a drink and relax.

It serves Monmouth coffee, pastries from Paul Rhodes Bakery in Greenwich and food cooked fresh daily by the venue’s chef. Elaine bakes the cakes including a sugar-free option for kids and offers a toddler lunchbox for £4.

The volunteer with island-based charity Community Parents remembers struggling to play with her son when he was a baby and hopes the cafe can offer new parents the support she lacked.

“I didn’t know how much interaction to give him,” she said. “I went to Gymboree and just repeated what they did and I used to push him in the pram, talking to him about the weather. I felt like that crazy mum.

“I’m lucky to have a lot of support now, so that does take the pressure off me but I think it’s great when you can really interact with your children and I hope that’s what this place can offer.”

She also hopes it will fulfill their initial dream to give Nico a place to flourish.

“It’s a whole balancing act,” she said. “I don’t want my son to grow up thinking his parents were distracted by this.

“We built this for him and we go there as much as we can because we love to be involved and I really enjoy talking to the parents. It’s so important to me that he feels loved and knows I’m there for him.”
Go to tinytigers.club for more information or to make a booking