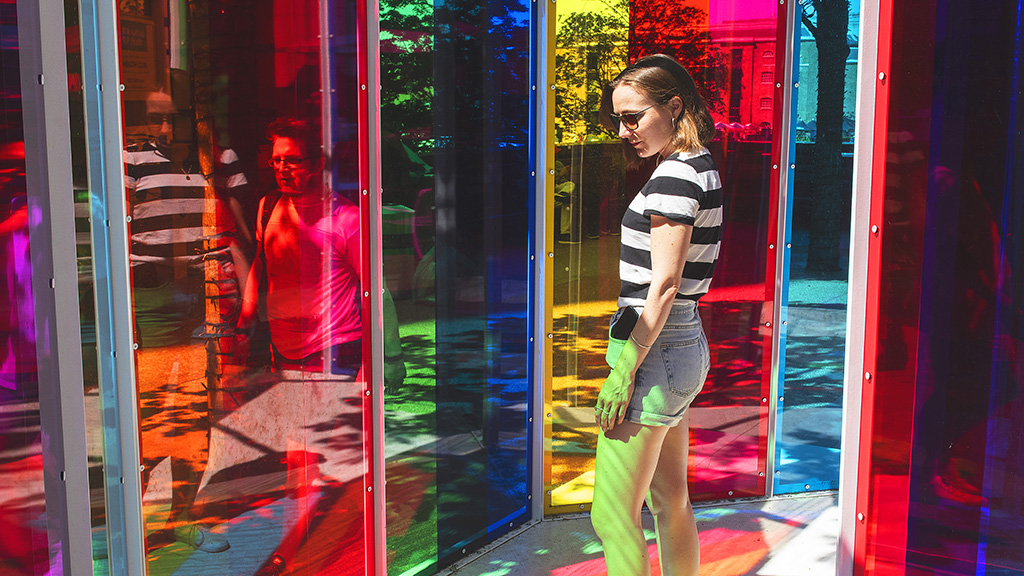 You’d struggle to find a more appropriately placed artwork in London than Liz West’s Hymn To The Big Wheel. Installed in Canary Wharf as part of its Summer Lights festival, featuring 11 works placed across the estate until August 21, the walk-in structure at Wren Landing is composed of vertical, deeply coloured panels for visitors to interact with.

While the work is visual in nature, it’s sound that links it by coincidence to Cabot Square, just south of its location – where restaurant and live music venue Boisdale Of Canary Wharf has played host to both pop sensation Mel C and, more regularly, reggae powerhouse Horace Andy.

“If you Google me you’ll find out I’m the Guinness World Record holder for the biggest collection of Spice Girls memorabilia in existence,” said Liz.

“I hired out my collection to museums when I graduated and that’s how I managed to become an artist full-time, so every piece of my work owes something to that.

“There’s also the idea of every piece being a self portrait, that the colours are borrowed from my obsession with music videos in the 1990s, that garish, Britpop palette.

“I’d always liked strong female artists and, in 1996, I was 11 – the target age. I remember watching Top Of The Pops one day – they came on and I was like: ‘These are for me’. I heard the first few lines of Wannabe and I thought, this is exactly representing me – they were all individuals, loud, girls-next-door and not necessarily wealthy.

“To a girl from Barnsley who wanted to strive for more, when seeing that I felt that if I worked hard enough and was passionate enough, I could achieve what I wanted to.”

Before cueing up a Spotify playlist packed with Spice Girls hits for your visit to Summer Lights, Liz’s contribution actually takes inspiration from another 1990s source.

“I love music and dancing, and I grew up with music around me,” she said. “I always try to find a bit of a double meaning to give more substance to my titles, so this one is a reference to Massive Attack’s Hymn Of The Big Wheel from Blue Lines, and if you listen to the lyrics in that song, it talks about the Earth spinning on its axis and how we all go by, day by day.

“I thought that was a wonderful sentiment, because this is a piece of work aiming to be a sundial, and that’s caused by the Earth revolving, and the ‘Big Wheel’ being the planetary system, with our planet going round its star – ‘hymn’ shows this work is also an homage to the Sun.

“I would love people to walk into the work with the sound of Massive Attack playing – they might start dancing and become performers within it as they move around it.”

And that’s especially appropriate for its location as fellow trip-hop nerds will know the lead voice on that track is Horace Andy, whose quavering, high-pitched tones, as mentioned, have regularly blasted out from Boisdale’s stage, prompting audience members to get to their feet, just a few hundred metres away.

As for the work itself, Hymn To The Big Wheel has been a long time coming – an opportunity for Liz to revisit an idea originally conceived for a completely different place.

“It’s two concentric octagons – a piece I’ve had in the back of my head for a long, long time,” she said.

“When I was first invited to submit a proposal for Spinningfields, Allied London’s property in Manchester in 2015, I had this drawing for an octagon pavilion which had coloured clear walls, just transparent block colours, not stripy in the way that it is now. That drawing was proposed and developed into something that was affordable at the time. It was my first piece of outdoor, public art, and, working with fabricators for the first time in my life, it was a big milestone for me in terms of my practice.

“The piece ended up going from being an octagon, to a tunnel to a prism structure, and that was due mainly to structural issues, like snow-loading and wind-loading in a Manchester winter.

“When I was asked to propose a piece for Summer Lights I didn’t know what I was going to do so  went through all my drawings and stumbled across one I’d made six years ago.

“I asked myself how I could bring that up to date and I was listening to that Massive Attack track at the time and it all kind of slotted into place in a really nice way.

“Then it was about placing one colour overlapping another to get visible colour mixing happening in front of people’s eyes.

“All my work is about the theory of how light behaves – in this case a sundial – and how colour behaves.

“I get lots of samples of the exact material, and I layer them over each other in a very methodical way – starting with the reds and putting every single colour over them, then the oranges and so on.

“At the back of my head is the thought that there are a number of panels in the installation, so I need that number of colour mixes. Then it becomes a matter of detraction – taking away colours that I don’t feel are working together. There’s an element of instinct within that as well.

“This world is full of grey granite, silver metal and reflective glass – that’s how most buildings are being made. I guess I have Seasonal Affective Disorder, that’s important to say, and randomly – choosing to live in grey, northern cities and towns – Barnsley, where I grew up, Manchester, where I live now and Glasgow, where I studied – my antidote to living in these wet, grey, northern cities is to self-remedy by creating these really vivid works.

“The feeling I want people to have when they encounter my work is meditative, for it to be about them. I don’t want to describe to people how they should feel. Everyone speaks the language of colour, no matter what your race, sex, age or background – it’s universal.”