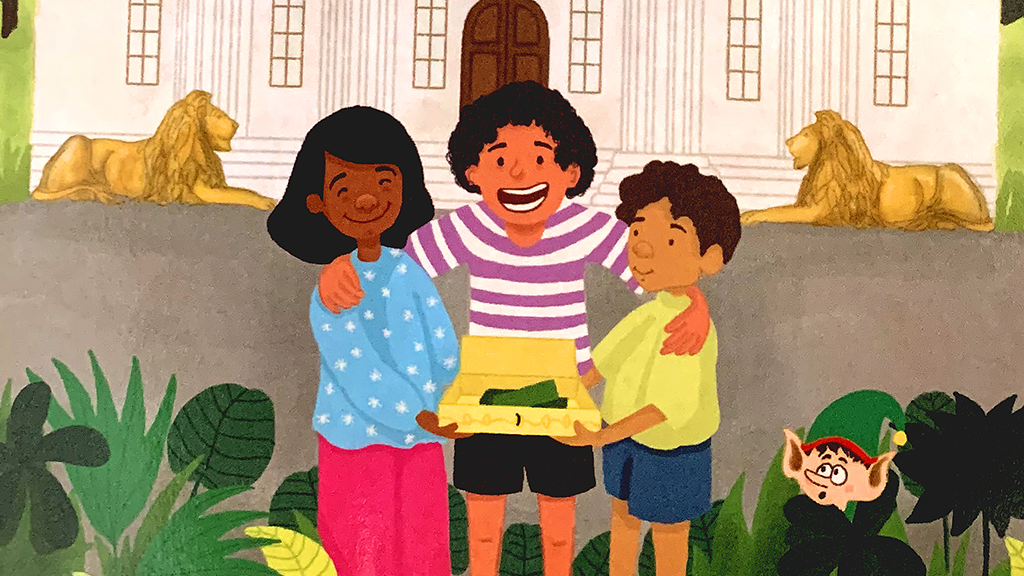 “My grandparents were exceptionally good storytellers,” said Nithya Sridharan. “I grew up in a joint house in Bangalore, where they lived with me and my parents. Every night me and my sister would be packed off to them for a while and they would tell us stories.

“My grandmother was a mathematician and they would weave complex topics such as algebra and geometry into the stories, which were often about the village where they grew up. As city-bred girls, me and my sister were completely enchanted by them.”

The Isle Of Dogs-based writer recently published her first book – The Magic Box – a story that similarly seeks to educate as well as entertain, although drawing on Nithya’s wealth of experience working in the financial services industry in Canary Wharf, rather than maths.

“The story, which is aimed at children aged seven to 11, came from starting to think about how I could weave some key financial concepts into a fun, magical tale, which is also south Asian, because I wanted to bring that flavour into books,” she said.

“A lot of it comes from living and learning in that part of the world. The story is set in a tropical town called Lokpuram and it follows three children who are trying to solve a problem that involves money. There’s a magical character in the mix as well.

“Within the story there are a lot of concepts that are blended together, which makes it easier for kids intuitively to understand key financial ideas, such as how a bank works, what one is and how it has money.

“There’s one part of the book which I personally enjoyed writing, that is about central reserve banking. I don’t use the words, but the concept is there and it’s woven into the story.

“We start with the idea of a bank and how borrowers and lenders can come to such an institution – a place that connects them – and shows how the basic business of banking works.

“I also talk about interest rates as a fee, which you pay on top of what you borrow. If you think about the origins of banking, the idea has been around a long time, but not in the forms we see today.

“The word ‘bank’ comes from the word ‘panca’ in Italian, which means ‘bench’. It started with people sitting down and trying to put borrowers and lenders together.

“They used to have IOU notes, which later evolved into the money and currency that we know today.

“So these concepts have been around a long time and people intuitively understand them, even if they haven’t heard of the terms before.”

Writing under the name PecuniArt – a portmanteau of the Latin word for money and art – Nithya was driven to write her book to help boost people’s knowledge of the financial world.

“I wrote the book because financial literacy is key to the world we live in – everybody uses money,” she said. “Recently there was a study which was done by the Pensions Institute, where they found that, if you look at the population of young adults, one third of them did not understand concepts like interest rates and inflation.

“I suspect lots of adults don’t understand either, even though these terms are constantly in the news.

“Research has shown children and young adults who are basically financially literate have an easier time in their lives – they’re better able to access low-cost loans, have better credit scores and less debt delinquency.

“I feel that with the world that we live in, if you know how to interact with money, what these concepts mean and what the economy is, then you’ll engage with it better, not just in terms of borrowing and lending, but also in terms of your own personal wealth and wellbeing. You’ll know what to do and what it means when the interest rates go down – you won’t get caught out by high interest payday lenders.

“The book is meant to be read as an introductory view of what a bank is, rather than as a detailed analysis of what the world is today.

“There is a section in the book – titled the concept check – where I talk about whether what happens in the story is real. I didn’t want to go into greater detail in terms of what you get from banks, or the stock market today, because I think that’s more advanced.

“The whole point of the book is to introduce these concepts and, obviously, it’s a magical story, so it’s not intended to be taken literally.”

Nithya, who has lived on the Island for six years, said she hoped to foster a sense of inquisitiveness about the financial system in the minds of her young readers.

“I want them to understand the concepts, but also for them to be something kids are curious about,” she said.

“I’ve had some feedback from children who have read the book, and it’s interesting that some hadn’t thought about these ideas previously – they asked a lot of questions about how it all works.

“I also hope the story gives them enough information on what these concepts are, so that they can ask and engage with adults on all those questions, and find out more about them – that it makes them curious. The feedback I’ve had has been that the kids are very engaged with the magical aspects of The Magic Box.

“The very young ones are disappointed that this part isn’t real. What was very encouraging though, was that even young readers were interested in the subject after they had read the book. You might think that banking, economics and finance sound very technical and not easily accessible, but I’m pleasantly surprised people actually find them interesting – I was hoping for that outcome.

“This is definitely an area schools should be focusing more on. An element of financial literacy should be open to all.

“There are a lot of resources out there already – the Bank Of England, for example, has a financial education portal. While some schools are doing good work, I certainly believe there should be greater involvement from them in providing financial education.

“A study by the Organisation For Economic Co-operation And Development looked at financial literacy for kids across the globe in 22 countries and found that, in certain states, policy intervention was needed to increase those levels.”

While The Magic Box – available in paperback via Amazon priced at £9.99 and at selected bookshops in London – is PecuniArt’s first title, Nithya is already thinking about another book.

“For the next one I will think about how to break down a very complex concept, like the economy,” she said.

In the meantime Nithya will continue sharing posts about money and art for both adults and kids via her Instagram account – @pecuniart.