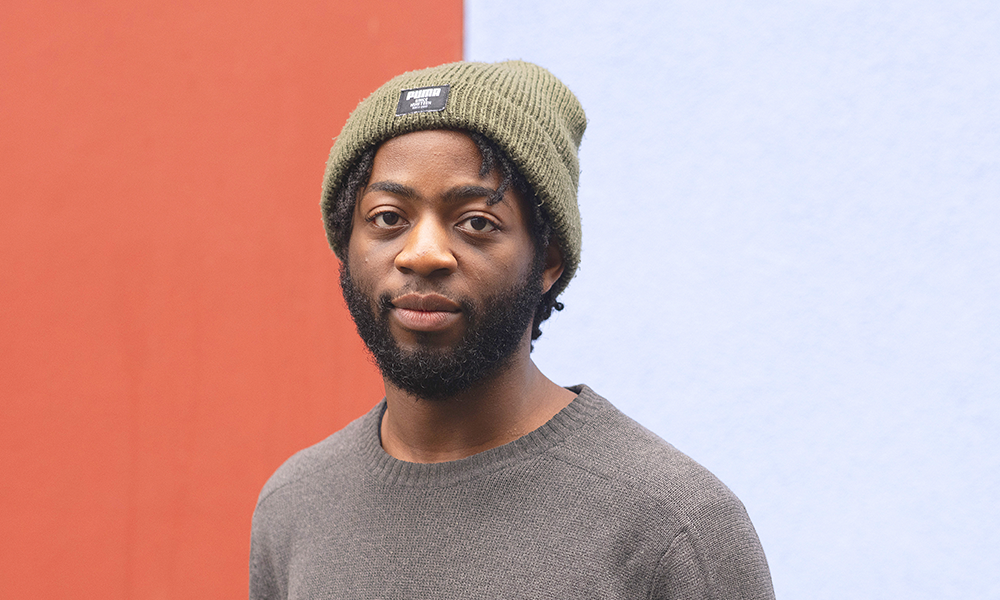 On a chilly January morning, playwright, poet and filmmaker Dipo Baruwa-Etti stands on a boundary in Southwark.

To his right the property is painted a vibrant scarlet. To his left, an expanse of eggshell stretches away. He’s on a line between two places, two different ways of looking at the world.

His positioning is fortunate because his latest play – An Unfinished Man, set to run for a month at The Yard Theatre in Hackney Wick – is an attempt to explore how conflicting viewpoints can coexist and be equally valid, and his physical positioning in front of the camera is a convenient visual metaphor.

Audiences going to see his work may wish to reflect that the theatre is also close to a divide – the line between Tower Hamlets and Newham, the borough where Dipo was born and grew up, living first in North Woolwich and then in Stratford where he’s based today.

“The play is about a man called Kayode who’s been unemployed for seven years, and his mum and a pastor come in and tell him he was cursed as a child, and that’s why he’s unemployed, so they set about reversing the curse through a prayer ceremony,” said Dipo.

“His wife thinks he’s just going through a mental breakdown and that the ceremony is going to make it worse.

“So it becomes a clash between Western and West African views on his mental health and his situation and, in the middle is Kayode, who’s trying to find out what the truth is and what his path forward should be.

“I have Nigerian heritage and in Yoruba culture if there’s something wrong or not happening in your life, you pray or sometimes have dreams about it and I found that spirituality really interesting.

“I believe in it, but to what extent is there still truth in it? How much is it society and how much is it a spiritual battle?

“Everyone around Kayode has all these answers about what he should be doing and what he’s going through. I guess the question I’m asking is whether there’s a true answer when it comes to mental health, unemployment, faith, spirituality, visions and witchcraft in particular?

“That’s what prompted me when I spoke to Jay Miller (artistic director at The Yard) about the idea in 2018 and I’ve been working on it since then.”

An Unfinished Man was originally scheduled for performance in 2020, but the pandemic delayed things. On the morning we meet, Dipo tells me rehearsals, which are now in full swing at the Jerwood Space, should have started 665 days ago.

In the meantime however, he’s been busy, working as Channel 4 Playwright on attachment to the Almeida Theatre and, more recently, seeing his work The Sun, The Moon, And The Stars performed at Theatre Royal Stratford East in June last year.

Softly spoken, with a wellspring of considered, creative energy bubbling through him, he said he wasn’t one for detailed plot planning. I tend to go straight into the writing process – I don’t research around what I’m writing until after a first draft,”  he said.

“For An Unfinished Man, what I did immediately was write something based on instinct, on who I knew these characters to be and the situation.

“Then, after that I started having conversations with people who are working on it with me, through a series of workshops with actors, bringing people in to talk about the idea, about the concept and the questions they may have.

“All those questions and thoughts continue to challenge my perspective on what I think the story is.

“Not many people read the first draft – just Jay at The Yard and two friends. I think now rehearsals have begun we’re on draft 12.

“So I’m constantly letting the story evolve, based on questions I’ve had and thoughts that people have given me.

“That might be from comments that actors have made even if they don’t know they’re making them, if it triggers me to have a new thought.

“Because there has been this two-year gap, we’ve had the chance to interrogate and live with the material for a bit longer than usual.

“Mostly in this case that’s about making cuts – we’re in a good place with it. The play hasn’t changed that much since 2020, but it’s got tighter and tighter and that’s been great.”

Dipo is prolific, regularly working on multiple projects at once.

As a writer-director his film The Last Days (BFI Network/BBC/Tannahill Productions) starring Adjoa Andoh and Amarah-Jae St. Aubyn had its UK premiere in August and he has projects in development with Blueprint Pictures, ITV Studios and Duck Soup Films.

“There was one day when I said I was going to be a writer, – my mum asked: ‘Why?’.” he said. “I was 15, I hadn’t written anything, but I loved reading stuff and watching TV and films, although I hadn’t seen that much.

“But that’s what I said I was going to do. I was part of a drama club in secondary school, so I was always aligned with creative theatre, but I performed in stuff rather than wrote it, because you don’t really do that then.

“The first thing I wrote was a TV script. I got my mum to buy me a bunch of screenwriting books, read them all and then I wrote 12 episodes of a show, called Secrets, Lies And Deceit – a drama, set in London, about a group of teenagers.

“My first five years of writing was really training – no-one ever saw the scripts. I wrote maybe 50 in that time because I just wanted to learn how to do it. That’s when I started writing plays, five years after deciding to become a writer.

“I actually went through and deleted all of the scripts I wrote as a teenager last year – although I have a record of the titles – because I don’t want anyone to ever see them. I think they’re just terrible.

“For anyone who’s considering becoming a writer, the only advice I have is to find stories you’re actually interested in telling because the path is really hard.

“I got my work seen through sending it out, submitting pieces to competitions.

“But I’ve also done lots of behind-the-scenes work in theatres and TV where I got to know people and took their advice. It’s often really about who you end up knowing and who can help you.

“If you’re writing by yourself without anyone challenging you or questioning what you’re doing, then it’s really hard to improve.”

While Dipo is engaged in many different kinds of writing, he’s especially drawn to the stage.

“What’s exciting is that live interaction with the audience – making them feel part of the narrative,” he said.

“That’s so important to me – that they are suspending their disbelief in such an interesting way and how you can play with the form.

“While I was interested in film before theatre, I’ve realised that plays are the medium at its purest and you don’t have to fit the conventions in the same way.

“I only ever write for myself – it’s an outlet – so if a play doesn’t happen it doesn’t really upset me. It’s not important whether someone sees it or not.

“But when an actor says the words I’ve written, it changes. It becomes something bigger, something I want an audience to see, more than just words I’ve put on a page.

“It feels like a story that’s important to the room and the people who are listening to it.

“Actors bring my work to life and they put their own interpretation on it. It becomes something physical and that’s when I want people to see it.

“With An Unfinished Man, we did the first workshop in May 2019 and one of the actors said to me that the play made them want to start a conversation about the themes and questions it raises.

“That’s the response I want. I hope people watching the play will start to think about the ideas – in this case about explorations of faith and spirituality alongside mental health and depression.

“For me it’s about people having those conversations, particularly among the black community, saying: ‘This is what I believe – can our beliefs align?

“I don’t think you can ever fully know and that’s what’s interesting. Both explanations are true.

“I’m not trying to give answers and I never want people to think that the writer’s view is the right one.

“It’s about what the audience thinks and however they respond to the play.

“What’s important to me is to keep making the work that I want to make, that’s truthful to my voice. I’m not too fixed on what I want to create, but I do want to be proud of the body of work.”