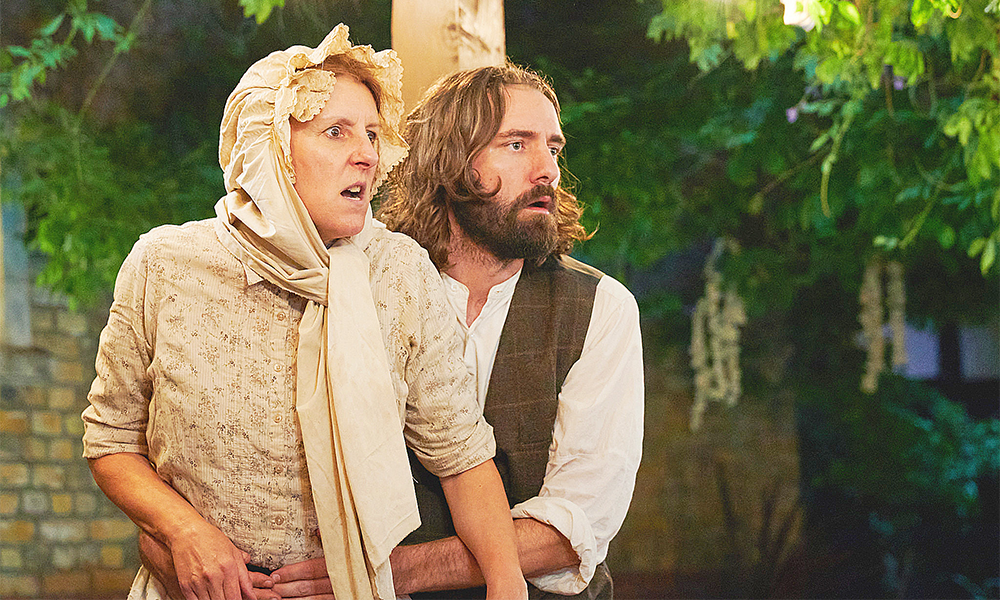 The Rotherhithe resident went from being one of the most commissioned theatre writers in the UK as well as a director, artistic director, composer, librettist, teacher, arts journalist and actor to, well, a man sat in a room.

As he has done since childhood, the 55-year-old turned to theatre, launching Rotherhithe Playhouse just after the first lockdown.

It started with Hamlet on the riverside and progressed to A Christmas Carol, the Rotherhithe Gospels and Great Expectations, each performed in a different open air location with sets built from recycled and found materials.

Current production The Macbeths runs until November 6 in the courtyard of The Ship in Rotherhithe with three shows planned for the Christmas period.

We sat down to find out more about the man behind the company.

How did Rotherhithe Playhouse start?

As a kid, theatre was really important to me. I didn’t go to a particularly good school so I would take myself off on Saturday afternoons to see plays and musicals at Bristol Old Vic.

It was how I learnt about the world. When Covid closed all the theatres, I realised there was a real danger of a whole generation of kids never being taken to the theatre, who will have never seen the plays they are studying.

I felt the longer the pandemic went on, the more people would get out of the habit of going to the theatre, so an entire art form could die away.

There is a beautiful riverfront outside my window so I thought I would get some actors together and we would go and do Hamlet down there.

It was very simply staged and the audience was really transported by it. I just thought we had to keep it going.

What makes it different from a conventional theatre?

Each production is in a different venue in Rotherhithe to help bring them to a wider public. I don’t think I would be interested in the nuts and bolts of running a permanent venue but each month we build a new theatre from scratch – it’s very exciting and you can adapt the performance to the site you are in and make it very special.

Tickets are free if you access food banks or subsidised school meals and for everyone else we run the Pay What You Can scheme. That way I hope it will always be affordable for people to take their kids to see a magnificent piece of literature, which is really life enhancing.

The other innovative thing we do is with the creatives. Because of the pandemic, lots of them took proper full-time jobs and now they find it impossible to give them up for short-term theatre commitments. So we only work outside of office hours so they can participate.

What sparked your interest in theatre?

Pantomime. I was taken as an annual treat and I used to sit there intently watching it so that for months, as I fell asleep, I could run it in my mind.

I came from quite a working class background in Bristol so there was no-one to explain theatre to me. I assumed it was just the actors. It didn’t occur to me that someone wrote and directed and designed it.

I thought I wanted to be an actor and trained for three years and was relatively successful playing, ironically, upper class twits in light entertainment and ended up in a Science Fiction soap opera Jupiter Moon that they used to launch Sky.

It was a fantastic cast with people like Anna Chancellor and Jamie Glover. I have never laughed so much and made lifelong friends. But after that, I realised acting wasn’t for me.

I started writing plays and sent one in a brown envelope literally addressed to The BBC, London and a fantastic producer picked it up and they did it on Radio 4. One day I wanted someone to direct a version of it and I decided to have a go myself. Ever since I have had this three-pronged career.

I prefer theatre, as being on TV is more like being in a factory. Theatre is a knife edge and I still feel that now times ten because every day is fighting fires. I just wish I could make a living at it on its own.

How did lockdown affect you?

It was truly shocking and even now I’m struggling to acclimatise. I hadn’t been unemployed for 30 years. Suddenly it all stopped and, from an incredibly busy, stressful life there was just me, sat in a room. I was forced to say: “I’m not my career. Who am I? What do I believe in? What do I want to happen?”.

I discovered I had to make theatre because it was in my blood but I had to find a new way of doing it for life, during and after this wretched pandemic.

Before, I was glued to my diary and didn’t know who I was. Now, ironically, because of this project, I’m still a person rushing around putting on plays but I know why. It was a chance to throw it all up in the air and decide what I wanted to take from my old life into my new life.

Also, for the first time in my life, I became penniless. I wasn’t wealthy before but never in my life, even as a student, had I had to stop and think: “Can I afford a coffee?”.

That was very sobering and fuelled me to think about how I could help other people in this situation. There are many wonderful people running food banks but I think as humans we have to be a bit more than that.

Why did you choose to perform classics?

I always assume people will be sick of things like Macbeth or Great Expectations and know them inside and backwards.

But people come who have no idea of the story and who have never heard them and it’s so exciting to give people their first experience of these incredible pieces of work.

Shakespeare is this miraculous, ridiculous phenomenon because there are these words and every time you go back to them they mean something different. It’s endlessly rich and rewarding.

Have you discovered any parallels between your latest production and your present situation?

Completely. Macbeth starts off with a very certain trajectory and then everything falls apart and it comes from an unexpected quarter, his encounter with the three witches, which feels a bit like our encounter with this strange disease which came out of nowhere.

He’s ruthless and violent and I’m not those things but we were all brought up to think about career and how we advance and get a better job.

Then, suddenly that rug is pulled away and we are in the situation that Macbeth is in. What does he pursue and what feels wrong? Of course he makes all the wrong choices, but watching him do that tells us a lot about our lives and our choices.

Are you happy with your choices?

I’m making the best choices I can and struggling every day to do it better. When we started, nobody showed up and now it has a little fanbase, so I’m sure there is a need for it. But it is endlessly exhausting not having any money.

Everything has to be found on the street or bought in the pound shop. There’s no way it can make money, unless it’s very heavily subsidised, because the pop-up theatres we make seat a maximum of 60 people.

I haven’t taken another job so far, but will have to change that because it’s impossible to keep living on £20 a week. I just know we have to always be there for our community. So, no matter what, they can go to the theatre and see something fantastic.

How has the community responded?

It’s very difficult to get places to perform. I’m quite cross with some people who won’t let me put our theatre up in their forecourt. It’s troubling and has been a bit of an eye-opener.

Organisations that you think would go out of their way to help you find all sorts of by-laws and nonsense in order to justify saying no. But we are winning people over.

We need about 5m by 9m for our marquee and, if you give us that, we will create something magical for your part of the community. We don’t even need your electricity supply as we run everything on batteries.

What other help do you need?

We had a fantastic general manager, who has now moved on, so I’m looking. I feel there might be recent retirees out there who’d like to learn to project manage one show a year.

My absolute dream would be just to worry about what happened on stage. Also, if anyone has any money and would like to sponsor us, they would be contributing to something wonderful.

Will you perform any new plays?

I only want people who come to see masterpieces – nothing second rate because a bad theatre experience can mean you don’t go for the next 10 years.

I might write something about Doctor Salter and his wife who have statues on the riverbank because not many people know about them. They really suffered for what they believed but stayed and improved the area for everyone.