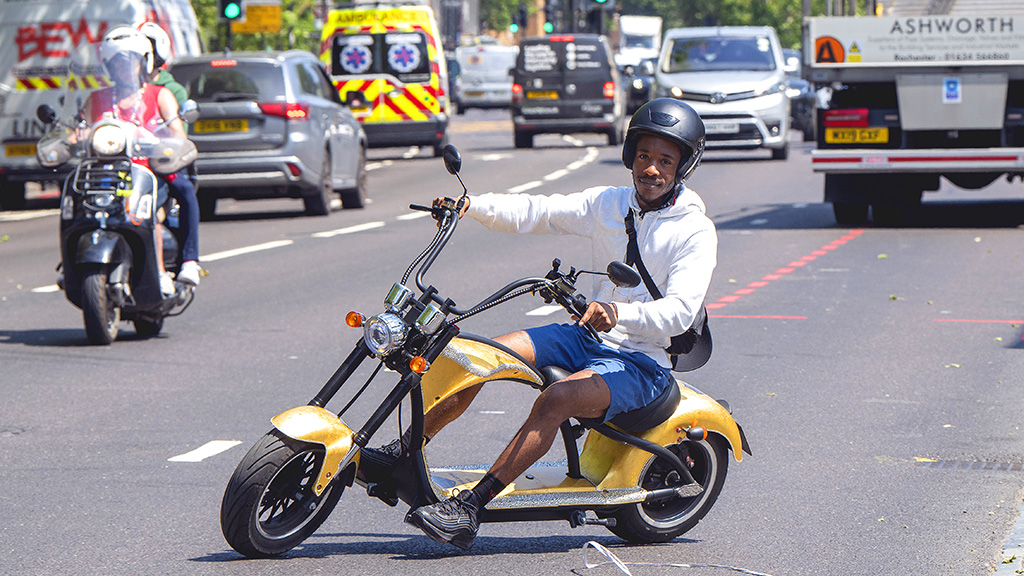 Creativity courses through Robert Grace like the electric mopeds he designs and sells flow through the streets of London. The founder and CEO of Stirling Eco began his career in decorative ceramic tiling, rising through an apprenticeship to the pinnacle of the industry with a company – Grace Of London – that produces intricate mosaic designs using 12, 18 and 24-carat gold, other precious metals and Swarovski crystals.

So what prompted him to launch an electric vehicle company and base his operation on The Highway in Wapping?

“Stirling Eco came about because I was asked to decorate a bike – an electric moped – about three years ago by a German company because of my reputation with gilding and ceramics and so on,” said Robert. “I said: ‘Sure, send it over’. This bike was to be decorated for a big fancy show in America and, when I got it, put it together, sat on it and tried it out, I realised there was nothing much like it in the UK.

“We actually stock that model in the showroom now – it’s called the Ridgeback. So we did a bit of product research and we were so far ahead of the curve.

“During the first lockdown, I was fortunate that I was staying for three months in Poole, in my friend’s beautiful house, 80 metres from the sea, sitting in the garden and thinking about what the world was going to be like. When you set up a business, you try to imagine how things will be in five years, but the virus turned everything on its head.

“We couldn’t really see beyond 12 months at the time, but I wanted to work out what could set us apart if we went into this market, just as I was set apart from my peers as a tile fixer by the creative component to what I was doing. We decided it would absolutely be the art side of the business that set us apart with the bikes, so we set about designing something really stylish.

“Primarily it had to be functional because people would buy it to get to and from work – it had to work correctly, but beyond that there was no reason it couldn’t be sexy and fun as well.”

The result was the Electro Ride, a low slung collection of curves evoking classic chopper motorcycles but built for modern urban riding. Powered by a 2,000W motor it boasts a 45mph top speed although comes limited to 30mph, has a range of 30 miles on a single four-hour charge and starts at £2,410 for the entry level model.

“You can buy an electric motorbike that does 70mph for 100 miles, but that isn’t the market that we’re in,” said Robert. “We want to transform the way people travel around cities – that’s the nucleus of our idea, that’s where everything begins. The components we use are pretty much standard – a moped is two wheels, handlebars and a throttle but electric vehicle technology is so fluid at the moment. The motors are getting more efficient, the batteries are lasting longer and controllers are evolving.

“So changing the motors on these to upgrade them is relatively inexpensive – it’s not like changing an engine in a car – and the maintenance on them is really simple. Really it’s just tyres and brake pads.

“That’s why we’re an art-orientated business – we can decorate bikes personally for clients and then upgrade the technology as it becomes available.”

Walk in to Stirling Eco’s showroom and there’s little doubt that you’re at a dealer with a difference. As well as selling the Electro Ride, the company stocks a range of other electric vehicles including the Vespa-style Trento.

Part art gallery, part den for electric vehicle enthusiasts, it boasts street art murals and paintings and a red carpet area for those seduced by the glitz and glam of celebrity.

Taken as a whole it forms the perfect backdrop to the mopeds – especially the art bikes, which include one gilded in 24-carat gold and festooned with sparkling crystals, available for £25,000.

“It’s the usual analogy of being a very small fish in a very big pond because we’re competing with big brands,” said Robert.

“If we were in the same room as them we couldn’t compete – we’d get torn apart. So that’s why we’re here on The Highway. What we’ve decided to be here is the most exotic fish in the tank and this is our aquarium. That’s why people’s eyes are drawn to us.

“We’ve got graffiti artists here, but we didn’t want the showroom to look like Camden Town, so there’s a really good objective mix of artwork here, combining the work of the Bickerton Grace Gallery, which I set up with photographer Anne-Marie Bickerton, with what we were doing with the bikes.”

A quick glance through Stirling Eco’s social media channels reveals a brand that’s unafraid to have a bit of fun while creating some buzz, tempting celebrities to mount its bikes and even collaborating with Ryan Reynolds’ stunt double in the Deadpool movies.

Look beyond the hype though and there’s both a solid business case and an environmentally conscious core to the firm’s operation.

At the time of writing London’s Ultra Low Emissions Zone (ULEZ) is set for a significant expansion, potentially affecting millions of car owners in just over 120 days.

Robert said: “There’s a massive number of people who will, all of a sudden, have to think about paying £12.50 a day to keep their car in the zone if it doesn’t fit in with the new restrictions.

“Many of those will be two-car families where they need two modes of transport. A lot of our clients are coming in because they can’t afford to keep two cars and they’re seeing us as an alternative. They need to keep one car to visit people outside London because our bikes aren’t allowed on the motorway, but they’re looking to us for a vehicle that’s ULEZ compliant, totally tax-free and that you can ride into the City without paying the congestion charge or polluting the atmosphere.

“We’re doing things properly. You need a CBT at least to ride one of our bikes and they have to be insured. But you also get flexibility – you can take the battery out and into your house to charge it, which costs about £1 for 30 miles.

“As a company we really want to look after people. The batteries are guaranteed for 12 months and we pride ourselves on really good aftercare and like to stay in touch with our clients. We even organise rides and people are welcome to join us.

“The nice thing about these bikes is that when you pull up at the traffic lights you get people asking about them – they really turn heads.

“I’d like to share the story of a client of ours called Greg. He works for a big law firm in IT and used to get the Tube every day from Golders Green to Moorgate and used to arrive at work angry every day.

“He came in the other day and we asked him how the bike was as he’d been riding it for about two months.

“He said: ‘Rob, I arrive at work happy every day’. It was really nice to hear him say that – now in terms of the commute he’s in control, there’s no-one around him, breathing on him, that’s freedom.”

There’s a sense that Stirling Eco, which launched in 2020 is very much at the start of its journey and with a showroom filled with art and creative people it’s a space that demands attention.

As for Robert’s tiling, he’s accepted Wharf Life’s challenge to create a special edition of the Electro Ride decorated with his signature mosaics. We’ll watch this space with interest.

One Reply to “Wapping: How Stirling Eco is bringing art to the booming world of electric vehicles”